While they are the only racial and ethnic minority in the United States with legal rights to federal health care services, Native Americans—a demographic also referred to as American Indians/Alaska Natives (AI/AN)—have some of the poorest health outcomes and access to care. Their life expectancy is 5.5 years less than all other U.S. races and they experience the highest rates of poverty, diabetes, and uninsurance. Native Americans are also heavily burdened by mental and behavioral health issues. In 2019, suicide was the second leading cause of death for AI/AN between the ages of 10 and 34, and violent deaths, unintentional injuries, homicide, and suicide accounts for 75 percent of all mortality for this age group.

It is crucial to examine the historical and legal context of AI/AN communities in the United States in order to understand and address these disparities. Following the forced relocation and bioterrorism of tribes dating back to the 18th century, the federal government and AI/AN developed a “trust” relationship wherein the government is required to protect tribal lands, assets, resources, treaty rights, and health care, in addition to other responsibilities. In accordance with these treaties, laws, and judicial decisions that form the legal basis of obligation, Indigenous tribes are considered domestic sovereigns with self-governance rights.

Legal obligations aside, decades of assimilation policies forced AI/AN to move to reservations and attend boarding schools that prohibited traditional Indigenous practices like religion, language, medicine, and cultural expressions (dress and hairstyle). Between 1790 and 1860, over 500,000 AI/AN children were sent to boarding schools to be “civilized”, often enduring physical and psychological abuse; sometimes children disappeared entirely while at school. These boarding schools often left students feeling isolated with poor health and living conditions, including rampant infectious diseases, poor sanitation, malnutrition, poverty, overcrowding, and inadequate ventilation in homes, and low quality education. These conditions led to decades of toxic stress and intergenerational trauma, which has in turn led to epigenetic changes in the AI/AN communities.

In addition to the cultural genocide, the passage of the Family Planning Services and Population Research Act of 1970 led to the forced sterilization of over 25%—70,000—Native American women in the 1970s without their consent or knowledge. The law subsidized the procedure for any AI/AN woman who received health care through the Indian Health Service or Medicaid. The reproductive autonomy of Indigenous women was further restricted by the Hyde Amendment, which prohibited federal funding for abortion services with very few exceptions. Like many policies at the time, this discriminated against Native women specifically because they receive health services through a federal agency, the Indian Health Service (IHS).

Federal responsibility for AI/AN health was codified for the 574 federally recognized tribes in the Snyder Act of 1921 and the Indian Health Care Improvement Act (IHCIA) of 1976. Together, these acts established the legislative authority for the federal agency known as the Indian Health Service (IHS). The IHS was created in 1955 and is housed within the Department of Health and Human Services (HHS); it provides health services for roughly half of the Nation’s 5.2 million American Indians and Alaska Natives. Eligibility includes being of Native American descent and regarded as a tribal member, as well as providing some legal evidence of tribal enrollment or certificate of origin and residence on or near a federal reservation. The IHS system has three major divisions: the federally operated direct health care services, tribally operated health care services, and urban Native American health care services and resource centers.

Unfortunately, policymakers, advocates, researchers, and other experts report that the IHS has been severely underfunded for decades, forcing the agency to prioritize certain conditions and ration services. Funding for IHS meets approximately 54% of the health care needs, and per-person expenditures are 50% of those of other public and private providers. Medicare, Medicaid, the Veterans Health Administration (VHA), and federal prisons receive up to three times as much federal funding per person as people served by IHS. Funding shortages and lack of medical personnel or equipment for on-site services have led to long wait times for routine health care and gaps in ancillary services. While medical inflation and Native populations have grown, funding has not kept pace.

It is important to note that while IHS covers many health needs for AI/AN, it is not a substitute for health insurance. Its services are only available for members of a federally recognized tribe and those who live inside the geographic service areas of IHS-funded facilities and programs. With insurance, patients can see specialists, get care for services not covered by IHS, and seek care wherever they need it. IHS collects funds as reimbursement for health services provided from other federal programs like Medicaid, Medicare, and the Department of Veterans Affairs. Medicaid is the largest third-party payer of IHS; it provided health insurance coverage for over one-third of AI/AN adults in 2018.

In response to the disproportionately high rate of type 2 diabetes among AI/AN, the Special Diabetes Program for Indians (SDPI) was established in 1997. SDPI programs use federal funds for diabetes treatment and prevention services, including exercise programs,physical activity and nutrition services, community gardens, culinary education, health and wellness fairs, culturally-relevant nutrition assistance, food sovereignty education, green spaces, and youth and elder-focused activities. The program has been extremely successful— diabetes rates in adults have not increased since 2011, and kidney failure from diabetes has dropped in AI/AN more than any other ethnicity group. In fact, the SDPI has led to the only decrease in type 2 diabetes prevalence among U.S. demographic groups.

One of the strengths of the SDPI is its use of Community Health Representatives (CHRs), who support diabetes prevention, treatment, and management in tribal communities and work as health navigators. SDPI employs CHRs to teach diabetes prevention classes, provide foot screenings, operate diabetes clinics, coordinate community programs on healthy behaviors, and screen for diabetes and comorbidities like high blood pressure and blood sugar. Despite its remarkable success, SDPI is flat-funded at $150 million per year for three years. The current funding renewal only lasts through December of 2023. These short-term funding renewals create challenges for SDPI grantees and prohibit long-term strategic planning, investment, and operations.

Great investment in and advance funding appropriation for the Indian Health Service (IHS) is urgently needed. Allowing for advance appropriations mitigates the effects of government shutdowns and funding delays, during which new grant awards are paused, and provider recruitment stops altogether. Additionally, Congress should permanently authorize the Special Diabetes Program for Indians (SDPI) at $250 million annually and include annual funding increases tied to medical inflation, as called for by the National Indian Health board in Resolution 21 – 04. While American Indians and Alaska Natives face the highest rates of type 2 diabetes in the U.S., the success of SDPI in reducing this burden warrants permanent and increased funding.

Policymakers should focus on increasing the availability of telehealth services and broadband access in Indian country, which often includes rural, geographically isolated areas. It is crucial to implement policies and practices that honor traditional healers as respected providers and as a reimbursable expense through existing funding streams. Greater collaboration with community organizations and local healers builds trust in the medical system, strengthens continuity of care, and allows providers to disseminate resources and information to a wider audience. Health promotion for AI/AN also means improving employment and educational opportunities, access to healthy food, community infrastructure (safe roads and drinking water), environmental health, and providing safe housing.

To achieve health equity for American Indians and Alaska Natives, adequate funding for evidence-, outcome- and community-based programs and interventions is imperative. Addressing the root causes of poverty and poor health requires a stronger social safety net for AI/AN, a greater pipeline of health professionals to serve in tribal communities, and reversal of structural and environmental racism. Most importantly, the healthcare sector and government must acknowledge and address the generational trauma inflicted on American Indians and Alaska Natives. Safeguarding and promoting tribal health is more than a legal obligation, it is a moral imperative. 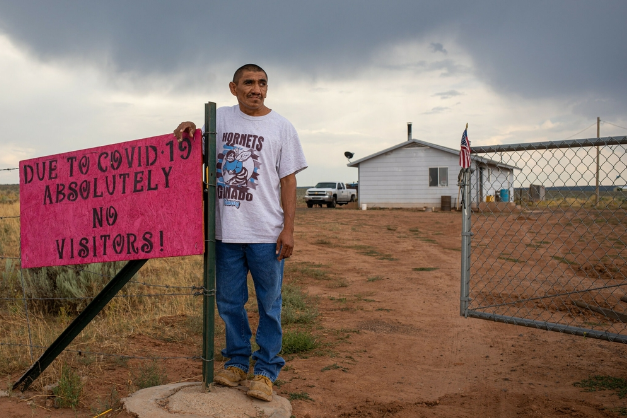 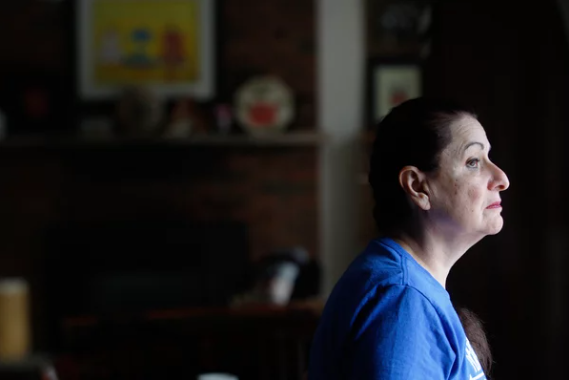 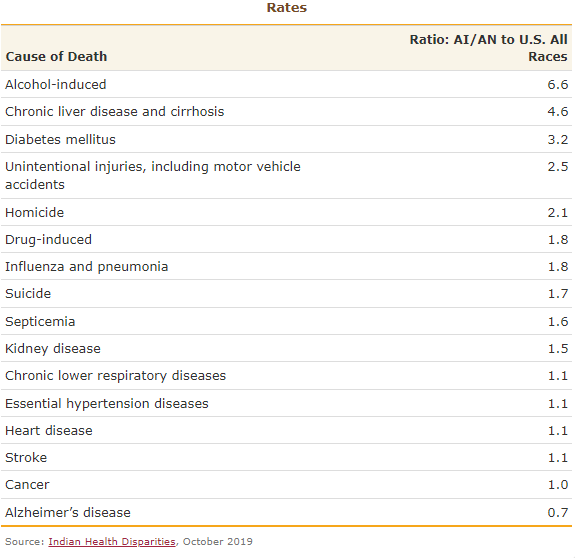 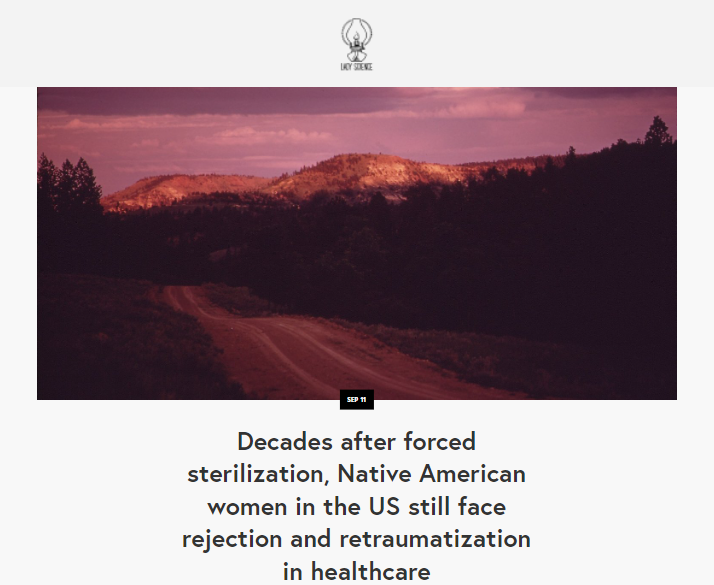 Decades after forced sterilization, Native American women in the US still face rejection and retraumatization in healthcare 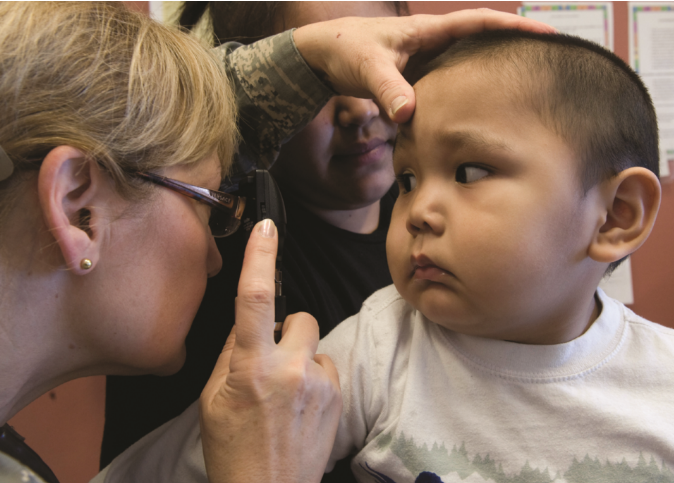 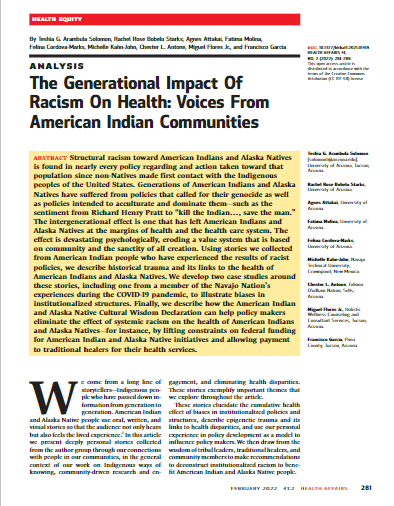 The Generational Impact Of Racism On Health: Voices From American Indian Communities 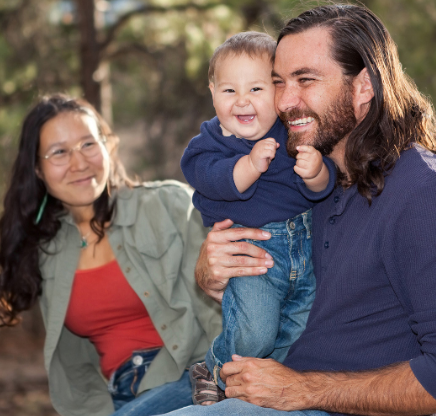 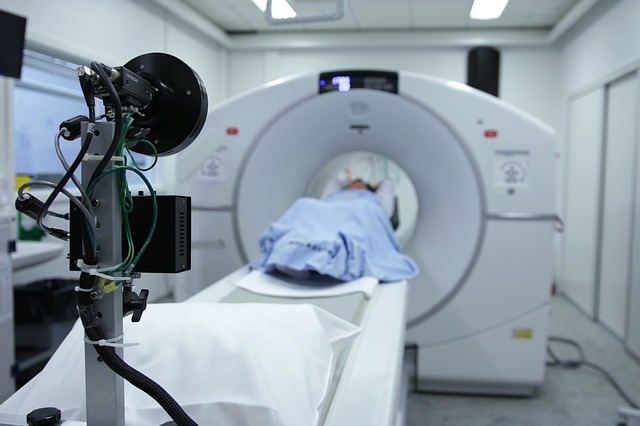